Nestled between the Flat Tops Wilderness and the White River National Forest lies one of Colorado’s most coveted hidden gems: Sweetwater Lake. The Sweetwater Lake Property, located in the rugged mountain landscape of western Colorado, has for centuries served the people and wildlife of the region, while simultaneously evading the grasp of developers and the capacity of conservationists.

The heart of a natural migration corridor, the property provides critical winter habitat for elk and deer, whose regional populations have plummeted by 50% in the last 20 years due in part to habitat loss and fragmentation. In addition, the lake has been a meeting place for local communities for centuries dating back to the pre-Columbian Ute Indians, evidenced by the presence of incredibly rare pictographs. The cave in which the pictographs are located is eligible for the National Register of Historic Places as it is one of only two known pictograph sites that portray a historical record of the region’s Utes. An obvious convergence of ecosystems and topography, the lake continues to connect local communities whose local economy has long been supported by ranching and tourism. As a major entry point to the Flat Tops Wilderness, the area is widely considered to be a national destination renowned for excellent hiking, horsepacking, and backpacking. The Flat Tops Wilderness is the state’s second largest Wilderness area, covering over 235,000 acres in northwestern Colorado.

For decades, the owners had allowed the public to visit the property and enjoy access to the lake, trails, and Ute cave. Visitors from around the state have frequented the area for decades to enjoy the vast lake, distinguished fishing opportunities, and secluded landscape. Local schools and youth programs have frequented the area to enjoy its diverse recreational offerings and the abundant educational opportunities provided by the lake and surrounding lands. Many nonprofit organizations are increasingly dependent on this unique resource as accessible open spaces continue to disappear throughout the region.

“I learned to ride a bike near Sweetwater lake – in the safety and fresh air of the vast space. The dirt road was bumpy, but I learned to overcome it. The Indian caves above the lake sparked my imagination, and I built rafts for my dollies in the creek, learning the ways of the water. I’ve hiked the many trails surrounding the lake, camped in the meadows, and enjoyed fresh caught fish from the lake. The stars that shine above Sweetwater Lake are some of the brightest in the world.”  — Kat Atwater 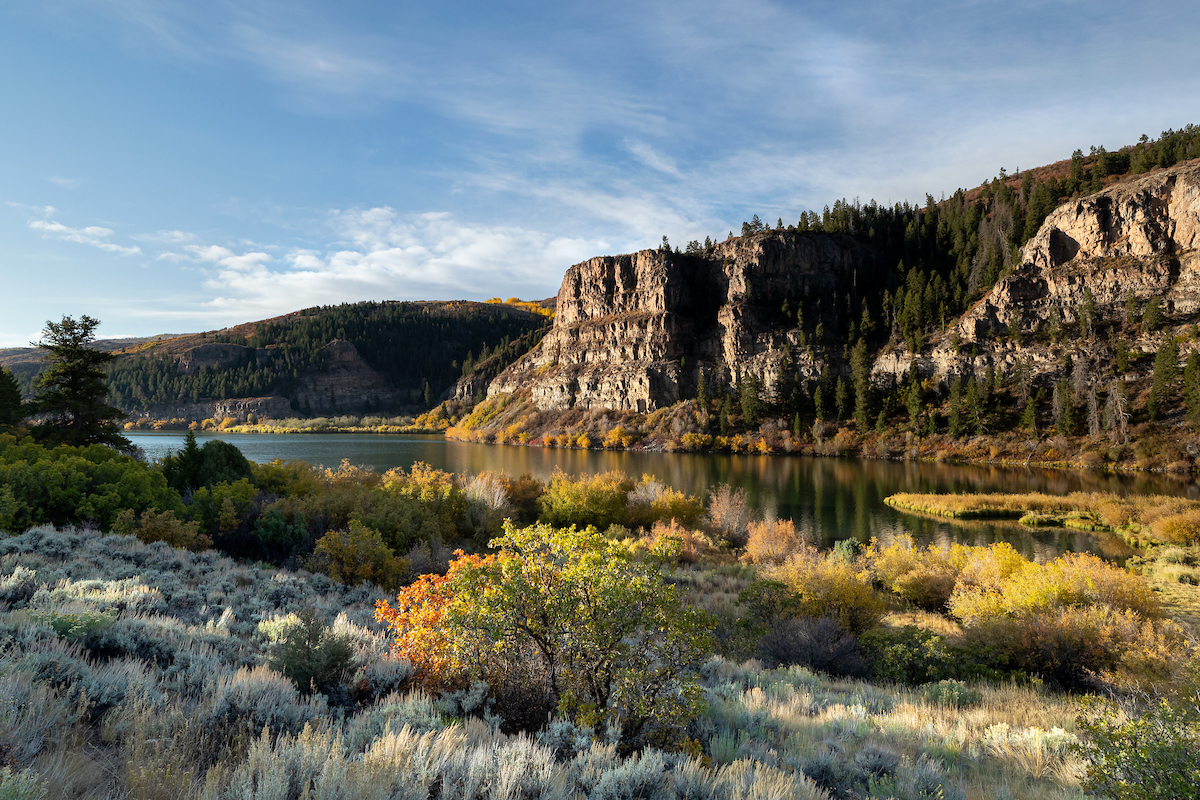 Over ten years ago, the property was purchased with a plan to develop a world-class resort, water bottling plant, golf course, and luxury homes as a vacation paradise with no public access. Fortunately, those plans were unsuccessful. Two years ago, public access was closed and the property was put up for sale. Fortunately, The Conservation Fund (TCF), a national conservation organization that has conserved over 8 million acres of land across all 50 states, managed to secure a contract to purchase the property amidst competing bids from private developers. TCF is now working to raise funds to close the deal in partnership with the Eagle Valley Land Trust (EVLT), a local nonprofit organization that has protected 36 properties in Eagle County.

The goal of the Save the Lake campaign is to protect and enhance the 488-acre Sweetwater Lake property in collaboration with TCF and local stakeholders. Once purchased by TCF, the property will be transferred to the United States Forest Service (USFS) to be integrated into the surrounding White River National Forest (WRNF). The WRNF is the most visited National Forest in the country. It currently manages 2.3 million acres in our region, including 11 ski resorts and 2,500 miles of trails. The WRNF desperately needs a relief valve to disperse recreationists. The Sweetwater property, with its bountiful recreational opportunities and access to surrounding public lands, fits the bill – it is the WRNF’s top acquisition priority.

The USFS is the ideal ultimate owner and steward of the property since it is surrounded by the WRNF. The property is uniquely situated geographically. While located entirely inside Garfield County, the only access road to the property starts in Eagle County. The nearest towns, and therefore the most likely to benefit economically from the conservation of the property, are all located in Eagle County. However, Eagle County is not legally able to allocate money from its robust open space fund for projects outside county borders. Despite this impediment, the Eagle County Commissioners approved a $500,000 toward the campaign from their General Fund.  Garfield County does not have an open space fund. The USFS’s unique access to the Land and Water Conservation Fund (LWCF), therefore, can help fill the funding gap prompted by county borders.

I like to call myself an amateur naturalist! I enjoy bird and animal watching. I’ve spent many an hour birdwatching around the lake. Peregrine falcons and bald eagles nest there regularly. Ospreys fish from the lake daily in the summer. I would hate to lose such a place to any sort of development. I want to save the lake!!” — Brian Widhalm

Once secured and transferred to the USFS, the agency aims to protect the natural and cultural resources while ensuring and enhancing public access. TCF, EVLT, and the USFS are currently in the process of designing management concepts to achieve the long-term vision for the property.

In less than six months, EVLT, TCF, and a local volunteer fundraising committee made up of over 40 local stakeholders have secured over $1 million from 149 donations and pledges, along with over 150 letters of support. This extraordinary outpouring of support demonstrates the regional and national importance of this project. Notable supporters include Senator Michael Bennet, Senator Cory Gardner, Representative Scott Tipton, State Representative Perry Will, Colorado Parks and Wildlife, Garfield County, Town of Gypsum, Town of Eagle, the Sweetwater Lake Community, Outdoor Industry Association, American Rivers, Vail Resorts, and Aspen Skiing Company.

On May 15, 2020, the United States Forest Service revealed its list of top priority land acquisitions for the year 2021. The 488 acres surrounding Sweetwater Lake was ranked ninth out of 36 projects. The Sweetwater project asked for $8.5 million in funding from the LWCF for the acquisition.

The Conservation Fund completed its purchase of the property in June, 2020. As the USFS completes its due diligence, EVLT and TCF will continue local fundraising efforts. TCF anticipates transferring the property to the USFS in the fall of 2021. After the property is transferred to the USFS, EVLT will maintain a stewardship fund to be used for maintenance, management, and improvement of the property and its resources.

Following the passage of the Great American Outdoors Act by the 166th Congress and signed into law by the President Trump on August 4th, 2020, the LWCF is guaranteed to be funded in full – $900 million per yer, in perpetuity.

Sweetwater in the Press

If you’d like to show your support, donate here.