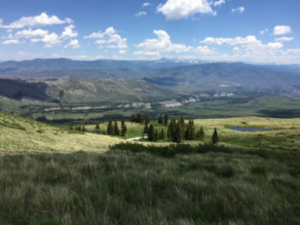 Located just three miles northeast of the Town of Eagle, this parcel of land features highly visible scenic views and critical wildlife habitat. The landowners, Tim and Leslie Winfrey, grew up in Colorado, with Tim being one of the descendants of the Buchholz family whom originally homesteaded the land. Remarkably, the conservation easement was fully donated by the Winfreys to the Land Trust. While the family will receive state and federal tax benefits, most importantly they gain peace of mind that the legacy of the Buchholz family property will be conserved in almost the same state as it was a hundred years ago for the benefit of all future generations.

The Buchholz Winfrey Ranch is also significant because of its size. At 1,760 acres, this is the land trust’s second largest conservation easement to date. With population projections continuing to climb, and the threat of development ever-looming on our horizon, land conservation has never been more important, and this announcement is cause for all of us to celebrate.

Conservation of this property will mean permanent protection of wildlife and plants that provide food, shelter, breeding ground, and migration corridors for several wildlife species including elk and deer. Under the agreement, size, location, and quantity of structures will be minimal, leaving virtually all of the habitat intact.

Brian Woodrich, District Wildlife Manager for Colorado Parks and Wildlife felt this project very helpful: “with current development rates, wildlife habitat is being lost at an alarming rate. Habitat fragmentation is also occurring rapidly in the area. This conservation easement will protect excellent habitat for wildlife and offset development in the immediate area.”

The History of the land

The Buchholz Family is no stranger to our lands or having a hand in protecting them. In fact, Nick Buchholz and his family first arrived in Eagle County in 1882 and played a big role in shaping the County that exists today, according to Eagle County Historical Society President Kathy Heicher.

The family originally homesteaded in the area in the 1880s. The current property was homesteaded in the early 1920s and through the donation of the Buchholz Winfrey Ranch conservation easement, the family continues to preserve our local history to this day. As Kathy stated herself, “Nick Buchholz would be proud.”

When we, as a land trust, discuss the benefits of land conservation and preservation, the best way to explain is via the landowners themselves. Tim Winfrey had this to say about the land that’s been forever protected and its history:

“I grew up learning about the family heritage and history of the area. As I child, my Mom had my siblings and me stay part of the summer in Eagle with my great aunt and uncle, Orville and Beaulah Cave. We would also come up with my grandparents to maintain the house they kept in Eagle and to spend time up on the property. The preservation of the land relative to family history is important. The easement makes sure that after we’re long gone the property will remain in the same condition as when it came into the family.”

“The whole parcel of land and its proximity to town makes me feel good about the decision for the easement. Without the easement, there remained the possibility that someday development could occur, the result of which would be a bunch of homes or structures very visible from town. The conceptual things about easements are easy to understand intellectually. But when Leslie and I were in Eagle a while back looking up at the property from where my Aunt’s old house used to be, we were reminded of the public benefit in preserving the land. And I am grateful to the Eagle Valley Land Trust for their role in making it happen. I also very much appreciate the State of Colorado and the United States for their support of the concept of conservation. Their economic incentives played an important role in conserving the land, and I think this transaction is a great example of public/private partnership”

It’s no secret that humans are not always great at stewarding our land. Declining wildlife populations and contaminated soil, water and air are evidence of this. But where there is evidence of a lack of stewardship, we are encouraged by the generosity of those who made this conservation easement a reality and in particular, the landowners. Because of their decision to forever protect Buchholz Winfrey Ranch, this property will be virtually pristine forever and will prevent disturbances that degrade the natural world we rely upon for our own survival. We owe a great deal of appreciation to Tim and Leslie Winfrey and the Winfrey family.