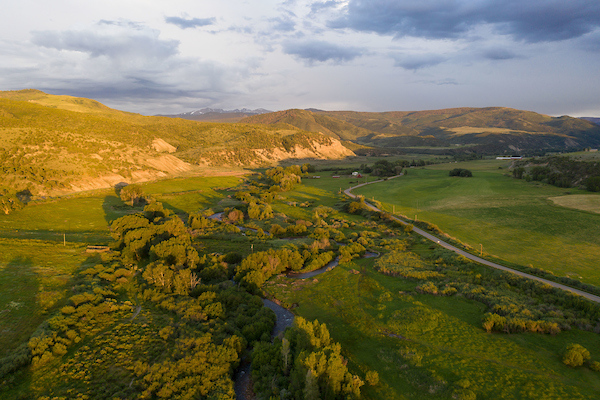 When Rosie Shearwood and her family arrived in the Eagle Valley in 1969, the Brush Creek Valley’s agricultural character was already threatened. Eager entrepreneurs itched to transform the county’s open ranchlands into profit-yielding ski resorts, golf courses, and related development. Ranchers, some reluctantly and some enthusiastically, began selling out their hay fields and cattle pastures in the face of seemingly unstoppable land use changes.

The Shearwoods (Rosie, husband Pete, and son Scott) bought a chunk of property a short distance below the confluence of East and West Brush Creeks. Their love of that land and lifestyle prompted Rosie to become a dedicated protector of not only the Brush Creek Valley, but also other undeveloped lands in Eagle County.

Rosie’s land preservation work began in 1972, when a St. Louis, Missouri developer bought numerous Brush Creek ranch properties with the intent of building the massive “Adam’s Rib” ski and golf course resort in the quiet valley. Alarmed local citizens organized into “The Concerned Citizens of Eagle County,” kicking off a nearly three-decade fight over the character of the Brush Creek Valley. Rosie was in the thick of that somewhat renegade group, with their “Save an Eagle, Break a Rib” motto, fighting spirit, and occasional guerrilla-like tactics. The fight was worthwhile. More than two decades of government meetings, passionate letter-writing, and legal challenges ended in 1999 with the public acquisition of the land and the creation of Sylvan Lake State Park.

The lengthy Adam’s Rib fight exhausted many, but Rosie never wavered. With her unique mix of persistence, vision, grace, and activism, she campaigned for Eagle County’s Open Space tax, and cajoled others into speaking up against excessive development. Employing her wry smile and polite determination, she attended hundreds of hours of public meetings, voiced her opinions, wrote letters to the editor, and somehow managed to stay friends with people on both sides of divisive issues. She didn’t win every battle, but she made the decision makers stop and think before casting their votes.

“Brush Creek is the most beautiful place in the world to me. The sky is bluer, the sun brighter, the trees are greener, and the snow in the wintertime is whiter than any other place in the Rockies. There is softness in the air, a serenity that is not found anywhere else. I love that place so.”
­­­­

A Cup of Clear, Cold Water: